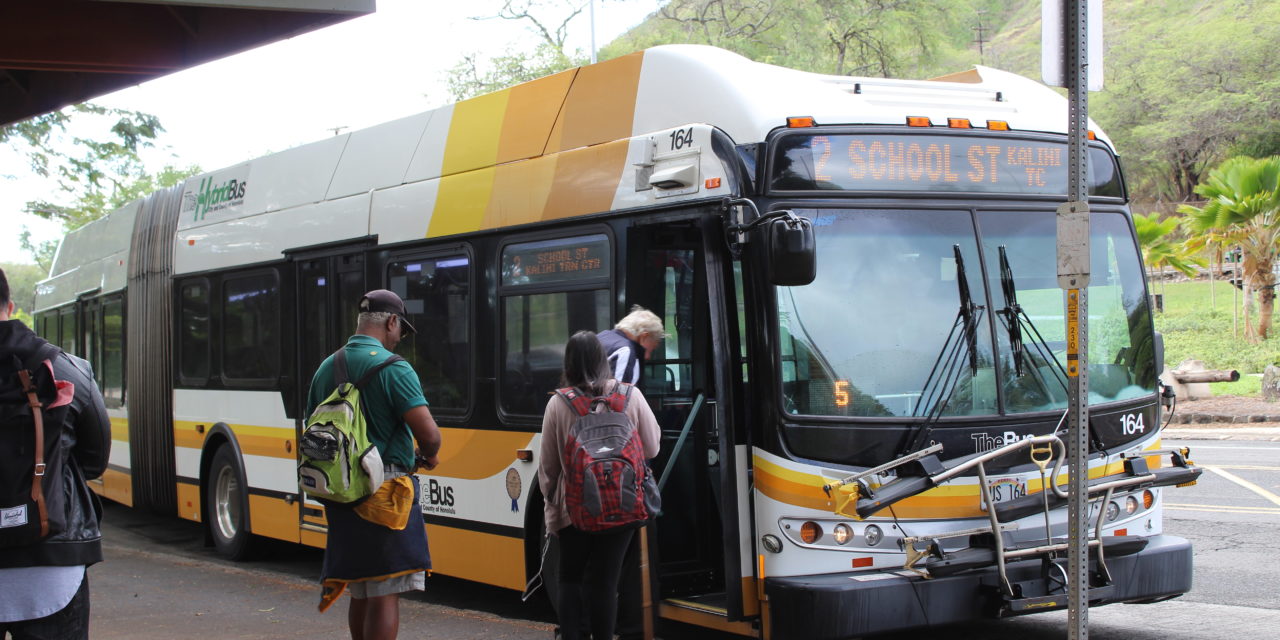 Many students normally make their way to school via their car, moped, bike, and much more. For me, I am probably the one 18 year old who still does not have a driver’s license and has to rely on their parent for a ride to and from school.

However, I do not always have this luxury of catching a ride. Often, my dad will have to work morning shifts or I might have to stay late at the school after class. This is when my reliance on Da Bus comes into play.

I have been taking the bus since 2012. My first trip was with my boyfriend (who at the time I was just friends with), and it was quite an experience that made me very nervous. I am a person who suffers from anxiety and overthinking things, so before the bus had even arrived I was constantly questioning him how I would put the money in, where would I put the money in, what is the inside like, and much more.

To board the bus, the transportation fee for adults costs $2.50. However, students who ride the bus constantly can purchase a U-Pass for $225 a semester at the Office of Student Activities (OSA) located in ʻIliahi 126.

In the end, the bus ride was not that bad even though I almost fell face first twice trying to balance myself. With just a couple more bus trips with him, I eventually became confident in taking it by myself and have been relying on Da Bus as a convenient mode of transportation.

However, there are some circumstances that I have become frustrated with and cringe greatly about. With four years of bus riding experience, I have compiled some of the most frustrating and cringiest moments that I have experienced with Da Bus that I am sure many others have gone through themselves.

Missing the bus due to misleading bus times: 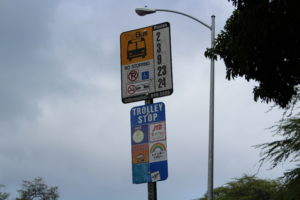 Bus riders will normally always find these signs near a bus stop, which indicates what bus numbers stop there and trolleys as well. (Photo by Lexus Yamashiro)

Those who catch Da Bus regularly know that there are three ways to finding out when the next available bus arrives: checking the website TheBusHea, using the app DaBus, and by calling the customer service department at (808) 848-4500.

Everyone who rides the bus will expect that it will show up according to the time that appears on their phone, or that it will arrive a little later. When it shows up early, however, this is when those PE classes in high school pays off since everyone starts booking it down the street.

To top it off, what misleads bus riders the most is when pick-up times get cancelled. I’ve been in that situation where I made sure to wait at a bus stop early so that I wouldn’t miss the bus that would supposedly come within five minutes, but yet when I check my phone again it notifies me that I would have to wait an hour.

I don’t know how this affects everyone else, but this absolutely frustrates and annoys me.

I live within Pālolo Valley, and everyone else who lives there too knows that only one bus circles in and out the valley. It usually takes 30 to 40 minutes for it to arrive from after it takes off from McDonald’s, which nobody has the patience for. I’ve noticed that for all of the times that I’ve had to catch Da Bus home after school, the driver will let everyone who was waiting at the stop on until it’s packed.

Not that I’m a claustrophobic person, but it’s just frustrating sometimes to make enough room in the aisle for people to pass through when I’m carrying a big backpack filled with bricks. What makes it even more difficult is when I’m stuck in the middle of the bus and have to somehow pull the string so that I can make my way off.

These moments are so “cringy” since I’m surrounded by several bodies – sometimes smelly – with no space to move around freely whatsoever. It’s bad enough that I’m short, so if I just so happen am forced to stand next to a taller person who is holding onto the handles from above, I’ll be getting a nice view and smell of some stranger’s armpit.

Bus drivers that totally disregard you running for them:

I don’t know if this is a driver’s protocol that drivers shouldn’t have to wait for anyone running, but it just breaks my heart having to see people running for their lives for them and yet the driver acts as if they can’t see them and will continue to drive off. I’ve been in this situation myself a few times and I know how much it sucks, but nothing can compare to what I have witnessed.

There was one occasion where I witnessed two elementary school siblings running for a No. 13 bus that would head into Waikīkī, and just as soon as they had stood in front of the doors asking the driver to let them on the bus took off, totally disregarding them. My heart sank having to see these little kids’ shoulders drop as they looked at each other, unsure of how they would get to school on time.

What pains me the most was having to witness older people, even elderly making an attempt to run for the bus, but because they’re too slow the bus ultimately takes off without a care. With all of these unfortunate times that I have seen from afar, I hope that this is not a procedure that drivers have to follow just so that they’ll be on time to the next bus stop.

Located in the front seats of the bus are signs that inform riders that these specific seats are designated for disabled and elderly people. However, there are some people who don’t seem to have a care in the world for who should actually be sitting in these seats. Therefore, they decide to sit in that area while a disabled/elderly person is forced to stand in front of them, struggling to keep ahold of the handles above.

The point of having the front seats designated for the disabled/elderly is so that it is easy and accessible for them to grab a seat instead of having to make their way towards the middle or back while the bus is in motion. It’s disappointing to see when teenagers or young adults sit in these areas, especially when an elder or disabled person comes on board and they don’t move.

I tend to notice that those who are sitting in this designated area that are young and able to stand will more likely move for someone who is coming on in a wheelchair compared to an elderly person making his/her way on. This is sad to have to watch, since it shows that society nowadays seems to show no consideration for others.

I’ve come to notice that there are certain parts of the bus that those who suffer from motion sickness would want to avoid. The back is a nausea-causing place that should definitely be avoided for those who get sick easily. There’s been a few times where I’ve gotten sick sitting in the back while coming out of Waikīkī, and this was even while using sea bands (a pair of elastic bands that those who get motion sickness wear that uses a plastic stud to hit an acupressure point in the wrists). 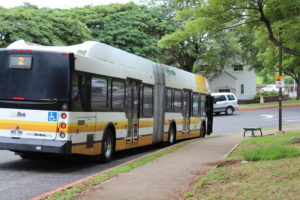 The hybrid buses are the longest out of all the city buses and aren’t always the best ones to ride for a person who gets motion sickness, especially when it gets crowded. (Photo by Lexus Yamashiro)

Another area that can cause motion sickness is in the middle of the hybrid buses, or as my mom likes to call them, the “caterpillar buses.” The middle of these long buses is where four seats that face each other on a plate swivels to allow the bus to make turns.

Since you are forced to stare at either the person sitting in front of you or at your feet, it would not be advised for a person with motion sickness to sit in these seats. If seats are made available in the front of the bus, those seats would be the best to provide comfort and reassurance to those who get sick.

Needless to say, catching Da Bus isn’t always as bad as it seems. There have been and are still times where I’ve had comfortable and non-frustrating moments.

Catching the bus home into the valley and watching the bus driver get out to help an old lady with her groceries board the bus made me smile at the end of the day. Watching a mother run with her two kids after the bus I was on and still get let on gave me relief. Seeing teens and young adults move towards the back as elderly and disabled folks board the bus makes me nod my head with approval and respect for them.

All of my frustrations and “cringy” moments can easily be resolved, but ultimately, it would take all of us as a community to prevent these unfortunate events from happening. 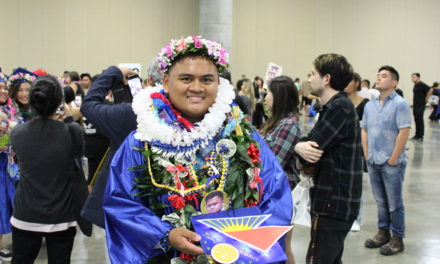 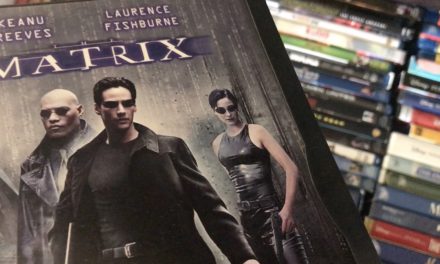 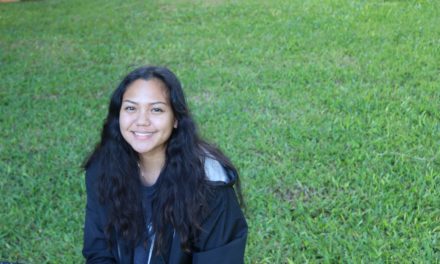 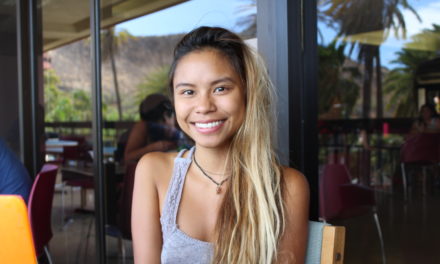